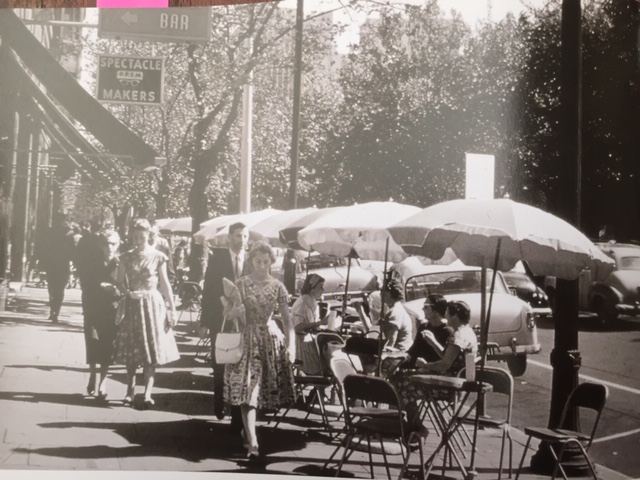 Looking at photos with the RHSV Writing Group

I recently joined a new writing group at the Royal Historical Society of Victoria. Each meeting has a theme, and at the first meeting we were also given an exercise, to write a short piece about this photograph, from the fabulous RHSV photo collection. My piece relates to shadows in historic photos, connecting back to an art project that kicked off this blog many years ago, and purports to be an extract from a  broader study.

A History of the Afternoon in Melbourne, Told Through Shadows in Historic Photographs

Just looking at the long shadows on the pavement tells us that that this photograph was taken on a sunny summer day, late in the afternoon.

Collins Street has a long and important history as a site of afternoon recreation in Melbourne, as part of the promenade known as ‘the block’, where Melburnians flounced up and down, observing each other and being seen in their best clothes, from the 1870s-1930s. A brief re-flowering of afternoon activity in Collins Street took place at the time this photograph was taken.

We see cluttered shadows on pavement, formed by tables and chairs, showing one of the European style outdoor street cafés that emerged in Collins Street and Bourke Street, around 1958-1960. The pavement cafés were shut down not long after this photo were taken, and they did not re-emerge for several decades. This Collins Street afternoon is one of a few hundred afternoons in the late 1950s -1960 when it was possible to sit under the dappled shade of a plane tree, and sip coffee; a vanguard moment in the evolution of the city.